Note: David thought it would be fun to post this experience as it presents a potential solution to the questions we have been asking in the ‘Future of libraries‘ debate for the past year (but rarely see money put into brick and mortar – let alone Grecian facade): “how should we use the “library’s” physical space (or archive, or museum or other cultural community space) to meet the new demands of an all digital collection?”

San Francisco, California.  08 April 2011. I had the pleasure of visiting the Internet Archive in San Francisco, which is now in its new building… or rather church! That’s right, the Internet Archive has purchased a former Christian Science church and converted it into their own Internet Archive “place” (shrine, office, church, temple, meca…?).  Leave it to Brewster Kahle to take what it means to be a Web 2.0 organisation and push it to the next level (Twitter’s new offices were blase in comparison).  The building is largely unchanged with the basement (formerly Sunday school space, formerly crypts?) into the open space office for IA’s fifty some employees.

Best of all the upstairs has been kept as a space for putting on events to help raise awareness about the Internet Archive and the brilliant resources of the Archived Web.  Sadly I had to head back to the UK prior to their “Lost Landscapes of San Francisco” event, which includes a slideshow along with live Organ music (coincidentally played by the technical and musical guru that is John Kunze from CDL) alongside additional music piped through a sound system you’d expect to see at a Kiss concert. However, you might miss all that when you walk in and are encountered by a pew full of terracotta warriors or rather former Internet Archivists, here is a quick video. In addition, there are some fantastic surprises set up for the official opening of the Internet Archive sanctuary, including some great examples of what green computing can achieve when you utilise server racks to both heat large cold spaces like sanctuaries as well as provide an artistic shrine the likes of the great marble busts of Rome, meet the digital LCD light age! 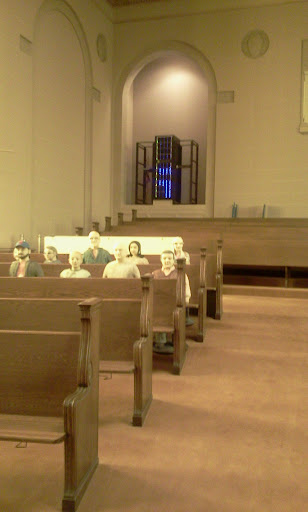 In short, if there is one place you visit on your tour of San Francisco, regardless of if you are a librarian, archivist or developer make sure the IA is top of your list.  PS if you ask nicely they will even invite you to their open Lunch on Friday, where you’ll be asked to sit at the table of Brewster and share your story alongside the current activities of “The Archivists”.

Disclaimer: In reading over this post, I realise I’ve naturally fallen into a discourse associated with religion (this is not unintentional or intended to be flippant), rather, I want to make it clear that what Brewster has achieved in this Grecian edifice is somehow the creation of a new kind of temple (church, Grecian/Roman, or otherwise): this place is neutral to religion and/or non-religion.  Its existence does embrace the social and communal activities associated with the Anglo-American church, however -only in as much as- it holds up the importance of preserving our rich heritage of the years past.  Perhaps his motivation goes much further back than the past 200 years of American religion and knocks once again on the doors of Grecian and Roman society with their Athenian Pillars standing for democracy and freedom of information?  I must admit, my rather cynical view of what we can achieve in this IPR closed world is slightly uplifted by this truly new form of physical space that Brewster has created, let alone what he is attempting to achieve in terms of creating international infrastructure components that the world over can benefit from as we try and build a Web that maintains our cultural heritage for generations to come.